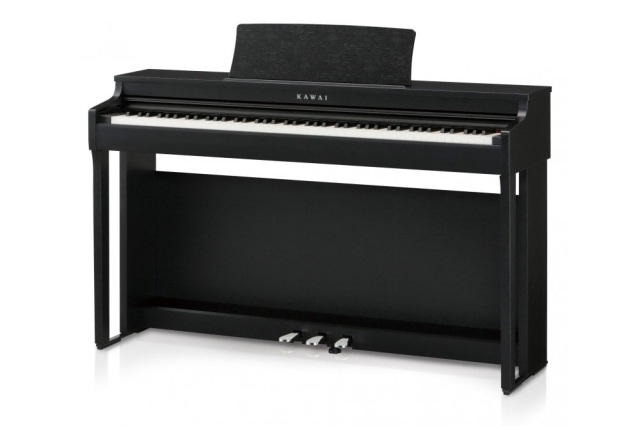 In addition to faithfully recreating the touch and tone of an acoustic piano, the CN 29 boasts a variety of additional features suitable for different playing abilities. The convenient lesson function allows aspiring pianists to learn piano with classical etudes and songs from the popular Alfred course books, while Concert Magic encourages even non-players to enjoy making music by simply tapping the keyboard with a steady, rhythmical beat.

The CN29 digital piano’s Responsive Hammer III (RHIII) action recreates the distinctive touch of an acoustic grand piano, with its realistic movement and accurate 3-sensor technology providing a smooth, natural, and highly responsive piano playing experience. The weight of the keyboard is appropriately graded to mirror the heavier bass hammers and lighter treble hammers of an acoustic piano, while structural reinforcements within the action assembly ensure greater stability during fortissimo and staccato passages.

The CN29 digital piano captures the magnificent tone of Kawai’s flagship Shigeru Kawai SK-EX full concert grand piano. Widely regarded as the ‘premier pianos of Japan’, Shigeru Kawai instruments grace the stages of concert halls and musical institutions throughout the world, and are prized for their exceptional tonal clarity. In addition, the CN29 also features the distinctive sound of Kawai’s highly acclaimed EX concert grand piano, which has frequently been selected by professional pianists in such prestigious events as the Chopin, Tchaikovsky, and Rubinstein international piano competitions, among others.

The CN29 digital piano features a three song recorder, allowing performances to be recorded to internal memory and played back at the touch of a button. In addition, the convenient lesson feature allows aspiring pianists to learn the piano using a built-in collection of etudes from Czerny and Burgmüller, or songs from the popular Alfred course books. The left and right hand parts for each piece can be practiced separately, while adjusting the tempo allows more difficult passages to be perfected.

The CN 29 features song recorder capabilities that both enhances one’s playing enjoyment and assists with piano study. The CN29’s useful recorder allows up to three songs to be stored in internal memory and played back at the touch of a button, serving as a convenient self-assessment tool for players of all skill levels.

The CN Series’ Spatial Headphone Sound (SHS) technology enhances the depth and realism of the instrument’s various sounds when using headphones or earphones, while also helping to reduce auditory fatigue when listening for extended periods of time.

In addition to standard MIDI jacks for connecting to other instruments, the CN29 digital piano also boasts integrated Bluetooth MIDI technology that allows the instrument to communicate with supported smart devices wirelessly. Once connected to a phone, tablet, or laptop, CN29 digital piano owners can enjoy a wide variety of exciting music-related apps that enhance their learning and playing experience without additional cables.

As with a grand piano, the viewing angle of the CN Series’ music rest can be adjusted to suit the performer’s playing position, or laid flat for convenience when notating scores.

Reinforcing the CN Series’ reputation as the most realistic digital pianos in their price range is Kawai’s Grand Feel Pedal System. This new development accurately replicates the position and individual weighting of the damper, soft, and sostenuto pedals of a Shigeru Kawai SK-EX concert grand piano to further enhance playing authenticity.